Irish moss powder Chondrus Crispus 1mm  (not sun bleached) is a species of red algae which grows abundantly along the rocky parts of the Atlantic coast of Ireland.

In its fresh condition this protist is soft and cartilaginous, varying in color from a greenish-yellow, through red, to a dark purple or purplish-brown.

The principal constituent is a mucilaginous body, made of the polysaccharide carrageenan, which constitutes 55% of its weight. The organism also consists of nearly 10% protein and about 15% mineral matter, and is rich in iodine and sulfur.

When softened in water it has a sea-like odour and because of the abundant cell wall polysaccharides it will form a jelly when boiled, containing from 20 to 100 times its weight of water.

Irish Moss has been used in Ireland since the beginning of the 19th century as a folk remedy for respiratory ailments. During the famine in Ireland emigrates exported the Irish moss to New England in the USA where it was used for sizing ropes and cooking. 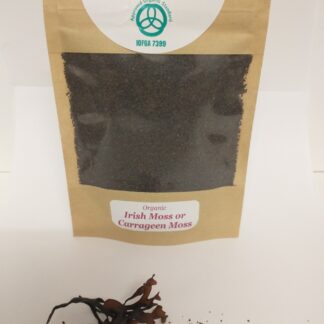